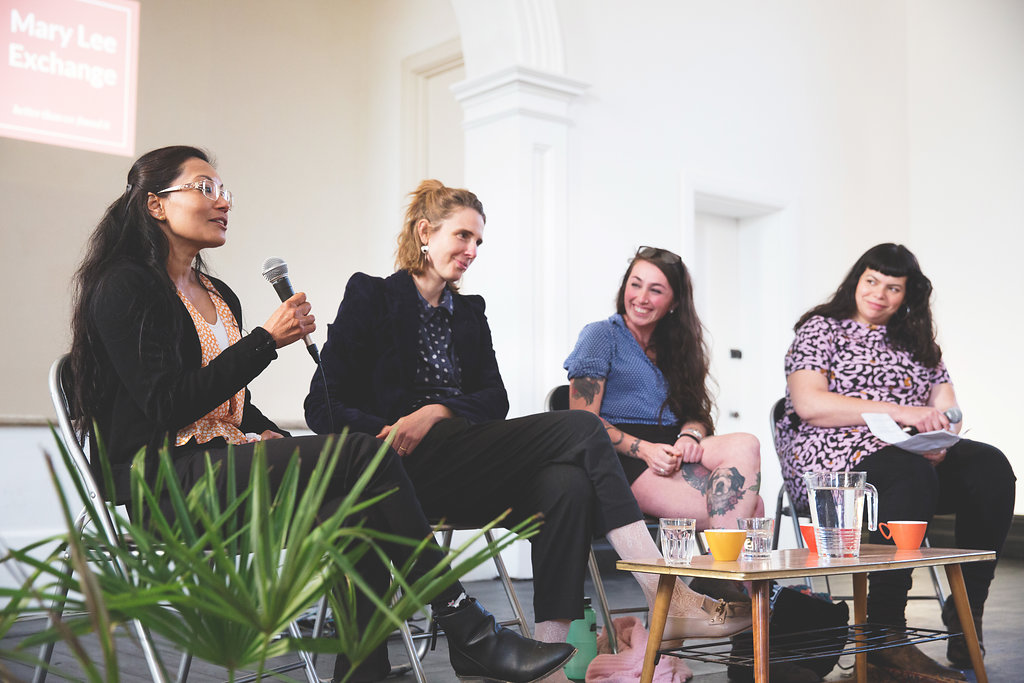 Emma Beech is a theatre maker and mother of three who started making shows for her mum in her bedroom when she was 6, and won the local Rotary Public Speaking competition when she was 13. She loves having D&M’s (deep and meaningfuls) about life with strangers. These conversations usually end up as rich content for her theatre shows. She finds the seemingly banal and everyday endlessly fascinating. Emma is a proud founding member of the Australian Bureau of Worthiness, a residency model that creates theatre from interviews conducted with people on the street, asking: What makes your day worth it? More on Emma…

Katey Bereny is the second eldest of six (she’s pretty sure she’s the favourite), has approximately 30 cousins and is a single parent of twins. She has also worked hard to eke out spaces within the queer communities and friendship networks where bonds are formed that resemble that strong familial bond that is both nourishing and grounding – because it is often here where we find out strongest allies and experience our most growth. More on Katey…

Devika Thomas was born and raised in Sri Lanka during a period of civil unrest, a civil war and major disruptions during which her pets gave much needed stability and comfort. Devika is a mother of one grown up child. She started her career in surgery but retrained in Pathology in order to spend more time with her daughter and animals. Her major interests are bone disease and women’s health. She is also a qualified Australian Native wildlife carer, and cares for several orphan animals at home; now a part of the family she could not imagine living without. More on Devika…

Her biggest life project so far (apart from her toddler and families) has been Born On Monday Choir (BOM), Port Adelaide’s own community choir. Ella co-founded the choir in 2005, and has been running it for the last 11 years or so. Ella believes that non-fussy choirs are a powerful way to build connections with each other and our community. More on Ella…

WHAT WERE THEY SPEAKING ABOUT?

Ella Pak Poy led Emma Beech, Katey Bereny€‹ and Dr. Devika Thomas in a conversation on family. They spoke about the families you get and the one’s you make; what it’s like to be a parent, child and sibling at the same time; friendship and love and maintaining a sense of self as a parent.

Naomi Keyte makes an interesting blend of folk and alt-pop music that is distinct both sonically and lyrically. Think Julie Byrne, Kate Bush, Sufjan Stevens, and Sharon van Etten. There is an intimacy in Keyte’s voice that is both gentle and powerful, and the band help bring to life her image-rich lyrics. Naomi will be performing solo for us at the Mary Lee Exchange but you have likely seen her, flanked by her brilliant band, at one of a series of Parlour shows, or a handful of festivals including Here’s to Now and WOMADelaide (2018) performing their 2017 debut album ‘Melaleuca’.

ACCESSIBILITY NOTES
Our venue, Holy Rollers, is accessible via a ramp with assistance from Mary Lee Exchange volunteers. Unfortunately the bathrooms located at the rear of the property are not accessible. The nearest public toilets are located either 130m north along Prospect Road at Palace Cinema, or 160m south along Prospect Road at On The Run.
If you can’t afford $5 this time, flick us an email and we’ll pop you on the door list: maryleeexchange[at]gmail.com